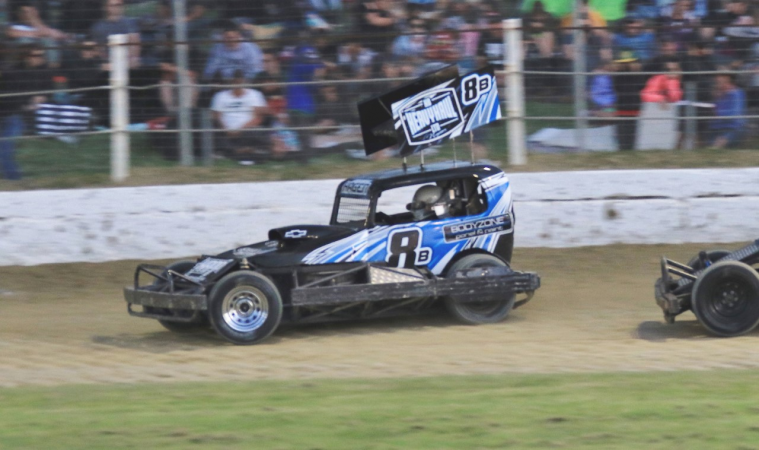 Clayton Hagen is one of 10 Hawkeyes eyeing one of six berths for the big dance. Photo/John Faulkner

All Hawkeyes contenders to front at Meeanee Speedway opener

Ten drivers aiming for a six-strong team is a tough assignment particularly when it's the Hawke's Bay Hawkeyes Superstock team.

That's the Hawkeyes team for the Palmerston North Teams Champs in February, the most prestigious event on the Speedway New Zealand calendar. The Hawkeyes are the defending champions and only one of last year's six, Regan O'Brien, who has retired, is unavailable.

But all 10 intend to leave no stone unturned in their quest to make the big dance. Roy's Hill logging contractor and father-of-five Clayton Hagen, 37, is one of them.

He is in his third season in the Hawkeyes extended squad but has yet to get the nod for Palmy. Back in March he was a member of the Hawkeyes team which won the National Teams title in Auckland.

"It was a bit of an experience but I put my hand up and stayed in the event until the last lap," Hagen recalled.

He knows the more event he can attend and post consistent performances the better chance he will have of being selected for Palmy. Three weeks back he raced in Gisborne where he finished third in first race before a fuel pump issue in the second race ended his night's racing.

"Obviously I want to stay pretty reliable," Hagen said and that will be his goal when he competes in the two-round Quin Building Series this weekend - the first round in Palmerston North tonight and the second at the Meeanee opener tomorrow from 6pm.

"If I can finish among the top two or three after the two rounds I would be pretty happy," Hagen said.

Later in the season he intends to tackle the North Island championship in Auckland and race in Stratford in his quest to make the six-strong team. He is impressed with the culture in the extended squad.

"We've already had a couple of fundraisers and we're all good mates who have got each other's backs."

Hagen is one of 22 superstock drivers aiming to front at Meeanee after racing in Palmerston North tonight. Almost all of the extended Hawkeyes squad including current 1NZ Randal Tarrant and former 1NZ Jason Long are on the drivers' list.

Providing Mount Maunganui's 1NZ Sam Waddell has an incident-free opening night at Bay Park this evening he will be among the 14 super saloon starters tomorrow night.

The Flynn brothers, 2NZ Grant and two-time national champion Steve are the best of the Bay starters while meeting sponsor, Hawke's Bay-based Mick Quin will again be contracted to Palmerston North this season.

Your's Truly wasn't surprised when stockcar class rep Greg Zachan mentioned he had more than 40 starters. This will be the norm for each meeting before the Hawke's Bay Doors national championship is contested at Meeanee.

"Obviously we will try and get every out of towner one or two visits at least before the nationals. We will run four heats at every meeting with each driver getting three of them," Zachan explained.

The progress of Hawke's Bay's Sam Barry, a newcomer to the class, will be watched with interest.