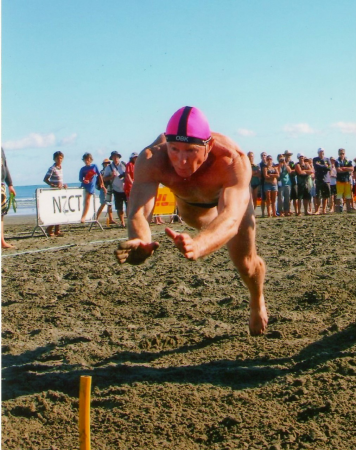 Greg Larsen on his way to another national beach flags title as a competitor in 2010.

"I've decided to focus more on my own fitness and competition. As you get older it takes longer for injuries and niggles to mend and my own rehab is a big priority before this summer's carnivals begin," Ocean Beach Kiwi Surf Lifesaving Club mentor Larsen said today.

While Larsen, 70, started surf lifesaving in 1964 he only had eight years of coaching. During that time he coached OBK relay teams and individuals to 28 gold medals, 18 silver and 11 bronze medals at national championship level.

"I used to tell my athletes the best way to medal is in a team. An individual medal was always a bonus. To me it was all about teams and the fun aspect of working with those teams," Larsen recalled.

"I was so lucky to get a lot of talented athletes athletes from other sports. If they could run 100 metres in the mid 12s I knew I could get them into 11s if they turned up to trainings," Larsen explained.

"Caleb [Makene] was a natural swimmer who joined our relay teams late in the summer. In his last year at Napier Boys' High School he won the 100 metres title in 11.2s and beat the track boys. Ben Lewis and current NBHS 1st XV winger Wesley Akeripa are others who have won that title at NBHS after stints with our relay teams," Larsen said.

He ranked national title winner Sarah Karika, a daughter of former Magpies flanker Jeff Karika, as the best female sprinter he has had and Lewis and Akeripa, who both won two national under-19 individual titles each, as his best males.

"I've been very, very lucky over the years. I will miss the coaching as I loved the athletes. I felt I could relate to them and earn their respect because of my struggles with asthma as a youngster. I had to work hard for what I achieved," Larsen explained.

"All of the athletes I had were club controllers who contributed to the community. I was proud of all the youngsters I had."

A 1991 world beach sprint title winner in Auckland, Larsen, has won 28 beach sprint titles and 21 beach flags titles as a masters grade competitor as well as the odd bronze in the surf ski. In March he will tackle all three disciplines in the 70-74 years grade at the Ohope-hosted national champs.