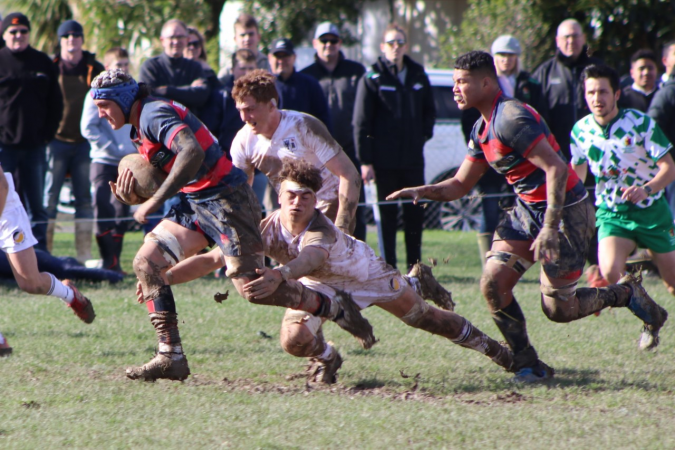 If you want to see if the next crop of young guns who could become familiar faces in a Magpies rugbyjersey or on your screens, then this weekend’s matches will tick all the boxes.

It doesn’t get any bigger for secondary school rugby in Hawkes Bay than two of the key annual fixtures and local derbies which are being played.

In the Super 8 competition, 2019 national champions Hastings Boys' High School will face off against arch rivals Napier Boys' High School in what is always a keenly contested match full of passion and pride between two of the best rugby schools in the country.

Lindisfarne College will take on St John's College in a prominent fixture between the two Hastings schools as they compete for bragging rights and points in the Central North Island 1st XV competition.

Secondary school rugby has seen a real revival of interest over the last few seasons and sees some schools growing team numbers and many boasting significant crowds who turn out to cheer on our best young players who keep becoming more skilled at a younger age which transpires into some excellent play and also the tradition which grows with these schools having played year after year for decades.

Old boys, families, school mates and any keen rugby watcher will converge to the side lines where these young men will play for the pride of their schools, for fun, to achieve their goals and for many aspirations towards rugby being a job.

The statistics show that this is the truth with 22 of the 2019 Magpies squad having attended these four schools and Hawkes Bay Rugby demonstrating the desire to keep and develop the talent that lies within the province which it has generously produced for a long time.

St John's College have this season seen quite a few changes within their team with 18 of their 2019 team finishing school last year.

This will see them field a young side which is building nicely and will put them in a good position in future years. They are well coached with the addition of Matt Wyatt who will bring enthusiasm and knowledge from his extensive involvement with a number of teams over recent seasons including Hawkes Bays representative team programmes. Wyatt is focusing on both the short term and future aspirations of his team.

“We have had great movements at the college in terms of mindset changes and are building strongly with a young squad, the emphasis has been put on everyone to act as a leader,” Wyatt said.

Wyatt picks No 8 Soni Paletua and lock Ollie Gardiner to be prominent this season as well as captain Brad Campbell and co-vice captains Caden Harvey and Dylan Homan. Expect Year 11 student Homan, a second-year 1st XV player, to have a promising future. .

Lindisfarne have challenged themselves with a tough pre-season campaign which will put them in good stead now the results matter.

They have faced Palmerston North, Napier and Hastings already which whilst not on the right side of the scoreboard all have been close fixtures. Lindisfarne coach Karl Jones sees this weekend's game being as normal a crucial fixture

“We lost our first CNI game to Whanganui Collegiate School on Tuesday so the St John's match on Saturday is vital for points. All of the teams are good quality teams – Whanganui, Feilding (who Lindisfarne play in Hastings on August 8) have a really good side and Rathkeale are all good teams and it will take a lot of effort to beat any of them,” Jones said.

Similar to St John's Lindisfarne have a good mix of ages which will provide continuity over the coming seasons. Co-captains in midfield back Charlie Dods and halfback George Charteris will be key figures as well as No 8 Tino Savea, flanker Lanson Randell, lock Ben White along with fullback Fred Mowat. Jones also noted the younger players in Kingshouse Tupuola, Tuawhio Porima, Corban Watson, Sean Lagikula and Monte Timu as ones to look out for in the future.

Hastings Boys' High School need no introduction with their impressive record over recent years making them one of the powerhouse rugby schools in the country. Covid19 robbed them of their chance to represent New Zealand in the Sannix World Rugby Youth Tournament in Japan this year but manager Jason Bird reports that they now are able to be the nominated team and will still be provided their opportunity in 2021 should travel be allowed. Hastings though won’t be able to officially aim to defend their national title as the regular national competition won’t be held.

The Super 8 competition is the biggest focus for Hastings who were runners up last season but naturally aim to go one better this year. After a close loss to prominent Auckland school St Kentigern’s they have recorded wins in pre-season against Feilding and St Pats Town from Wellington. The Super 8 competition kicked off last weekend where Hastings were not able to defeat a very good Palmerston North side which makes for this weekend's game against Napier even more important. Bird was quick to acknowledge this.

"All Super 8 games are tough with some very good sides but the Napier game in particularly important, it’s a local derby and the tradition of playing against each other for many seasons adds to the history of the occasion,” Bird said.

Hastings are again coached by former Magpie and NZ 7’s representative Tafai Ioasa and formerHurricane and Maori All Black Karl Lowe who both will continue to bring plenty of experience and advice for their players. Also on the line for the first time this season is the Moascar Cup which Hastings currently holds, known as the Ranfurly Shield of secondary school rugby it is a prized possession for any rugby school and not often seen within Hawkess Bay.

Being up for grabs will add a little more spice to the occasion if both teams didn’t already have enough motivation. Hastings will be expecting big things from its experienced senior players in Jacob Dorward, Andrew Hayward and Tini Nu'u. One to watch is Cooper Flanders who is the younger brother of Hurricanes and Magpies No 8 Devan. Cooper also plays as a loosie and is tipped to have a bright future in the game.

Napier started their Super 8 campaign with a 24-0 win against Gisborne last weekend but will no doubt find this weekend’s match a much harder task. Napier prepared for the season with an internal trial and in addition games against Lindisfarne, St Paul’s in Hamilton, and Feilding High School where two of the results went their way and a close loss to Feilding. NBHS coach Brendon Ratcliffe echoed the comments of his Hastings counterparts when discussing the match up between the two Bay schools

"Every Super 8 game is a massive contest but nothing bigger than the game against your closest neighbour, there is a lot of history between the two schools, a lot of pride in both our jerseys and a lot of respect, the match is always the biggest of contests and both teams are expecting that to be the same again on Saturday.”

Ratcliffe was reluctant to name any standout players within their squad adding that they aim to function as well as possible as a team and are successful when they play this way and trust each other. Sources tell us Napier does have plenty of talent, the midfield pairing of Tipene Maxwell and the experienced Jayden Stok work well and have some dangerous attackers in their back three of Ethyn Martin, Wesley Akeripa and Afa Moleli. In the forwards flanker Max Ratcliffe and No 8 Gilgal Malasia are strong. The up and comer for Napier Boys has to be Year 11 lock Gus Brown who jumps well, gets through a power of work and carries the ball well.

All teams have been challenged by the Covid 9 pandemic and like everyone had to adapt. This has resulted in tours being cancelled or postponed and in particular the early work on fitness, team play and momentum into the season being affected. They have adapted by using technology to keep in contact, train together online whilst all in their home environments and keep motivated when all were unsure if they would be lacing up a pair of boots this season.

St John's will host Lindisfarne from 11.30am on Saturday and HBHS will host NBHS from 12.10pm.