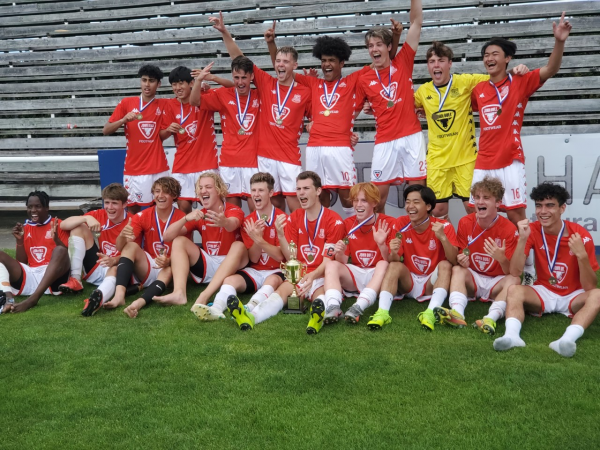 Birkenhead United switch in to celebration mode after their 3-0 win against Tauranga in the final.

This was one of the triumphant yells from the North Harbour club's dressing room after the premier division final at the Napier City Rovers annual Labour Weekend U19 Youth Football Tournament which ended at Park Island today.

Birkenhead United became the only club to win the premier title five times with their 3-0 victory against Tauranga in the final. Co-coach Paul Hobson, who has been coming to Napier with the club since they won the Satellite division title in 2008, pointed out his club has been in the premier division final nine times since 2010.

"Most of our squad were in the team which lost 3-1 to Tauranga in last year's final so we were pretty motivated," Hobson explained.

"Only four of this year's squad will be missing next year so hopefully we can be just as strong," Hobson said.

He stressed his side's unbeaten run was the result of a cohesive team effort and it would be unfair to single any individuals out.

"Unlike last year when we started hot and deteriorated this year we had a couple of early draws and improved as the tournament progressed," Hobson explained.

In their semifinal Birkenhead United beat Melville United 1-0 while Tauranga beat Western Springs 2-1 in theirs. The tournament attracted a record 60 male teams and 12 female teams and more than 130 games were played in ideal conditions over three days.

For the third consecutive year hosts Napier City Rovers missed out on promotion to the premier division when beaten 3-0 by North Wellington in the Satellite division semifinals. Teams have to reach the final in this division to gain promotion.

Rovers coach for the last three years, Chris McIvor, pointed out the score was 0-all at the end of regulation time in the semifinal. Rovers had failed to capitalise on a penalty attempt with seven minutes remaining in regulation time.

"Early in extra time when conceded a goal from a questionable penalty and the tide turned. But it was a cracker of a game with both teams full of Central League talent," McIvor said.

Defenders Kaeden Atkins and Isaac Milley, midfielder Luke Minshall, a guest player from Palmerston North, and forward Zac Madsen were the best of the host side's players. McIvor will be back at the helm next year and said only four of this season's squad will be missing.

The Ricky Foote-coached Taradale side exceeded expectations by also reaching the Satellite division semifinals where they lost 3-0 to Wairarapa United. In the final the score was 1-all at the end of regulation time and Wairarapa United won the penalty shootout 5-3.

The women's division final saw Hamilton Wanderers wallop Bucklands Beach 6-0 to win the title for the third consecutive year. The sole Hawke's Bay side in the division, Taradale, won three of their five games.