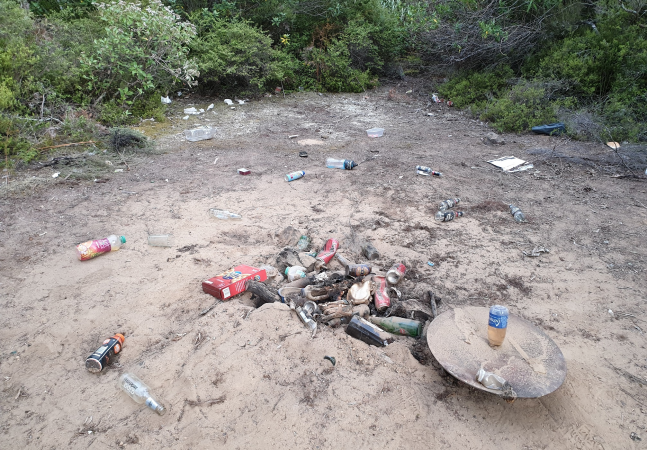 The Kuripapango site, where a group of campers have been trespassed for lighting a fire and leaving rubbish.

As the summer weather turns up the dial, the Department of Conservation is urging people to stick by the rules and not light fires in prohibited areas.

There is a total fire ban in all DOC managed land in Hawke’s Bay, including all DOC campsites.

“The holiday period is a great time to get into the outdoors, but it’s also the driest time of the year and the risk of a small fire getting out of control is very real – as we’ve seen with the recent Tangoio forest fire,” says Rod Hansen, local DOC Ranger and Compliance Officer.

Despite the fire ban, DOC Rangers are noticing some campers and visitors ignoring fire bans at camp sites such as Kuripapango and Glenfalls.

A group of five people has already been trespassed from a DOC campsite for lighting a fire and leaving rubbish near Kuripapango.

“A few people are ignoring signposted fire ban warnings in these areas and feel they are within their rights to light a campfire, even if it is ‘just a small one’ for toasting a few marshmallows or sausages,” says Rod Hansen.

“Somehow these people think that putting others at risk for the sake of a ‘kiwi camping experience’ justifies breaking the law. It’s incredibly irresponsible and disappointing.

“The recent Hawke’s Bay fires and ongoing Australian bush fires illustrate the very real risks of fires quickly getting out of control and threatening people, property and our environment,” he adds.

The impacts of fire can be very destructive and take years to repair.

People causing fires may be held legally responsible for the cost of putting them out, which in some cases may amount to hundreds of thousands of dollars.

DOC is taking a ’no excuses‘ response to people found flouting fire rules at its camp sites. DOC is also asking people to be on the look out for anyone illegally lighting a fire and reporting this immediately to emergency services by dialling 111.

DOC Hawke’s Bay maintains its own fire preparedness year-round and provides resources to fight fires wherever assistance is required by Fire and Emergency NZ (FENZ).

“We want to encourage people to camp responsibly and enjoy our outdoors safely without the risk of fire,” Rod Hansen says.