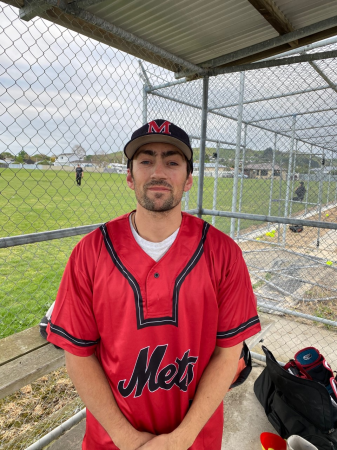 Jordan Waterhouse shone on the mound and with the bat for Mets yesterday.

Fast Pitch posted their first win of the season with a 4-3 victory against previously unbeaten defending champions in the pre-Christmas competition Saints at Akina Park, Hastings. As the score suggests it was a thrilling encounter with Fast Pitch securing the win in the bottom of the seventh.

Fast Pitch took an early 2-0 lead. Saints took a 3-2 lead in the fifth inning before Fast Pitch equalised in the sixth.

While centre outfielder Brown batted 1000 Chadwick stressed the entire squad contributed with the bat against the pitching of New Zealand under-23 squad member Adam Woon. Triple Campbell pitched the entire game for Fast Pitch and Chadwick said his combination with catcher Brock Colbeck was impressive.

Saints coach Luke Woon agreed the game was a great spectacle for the competition.

"Our boys didn't hit and left 10 runners on base. While we weren't happy with ourselves the boys realised you can't hit well in every game."

The Scott-Wray brothers, Jordan and Bailey, and Bradley Woon were the pick of the  Saints batters. Catcher Mace Price functioned well in his first stint behind the plate this season.

Mets proved too strong for the fast improving Maraenui Pumas side and needed just five innings to post their 7-0 victory. Mets experienced pitcher-catcher combinaton of Jordan Waterhouse and Curtis Huata, who played for top Wellington club Miramar last summer, hit all the runs in.
Waterhouse was dominant on the mound taking 10 strikeouts and allowing one Puma, Jacob Mita, to reach first base courtesy of a hit pitch. Promising Pumas pitcher Bailey Carson kept Mets runless during the first two innings.
But with two down in the bottom of the third he walked Joachim Paul Jnr and took the next two outs before Huata smashed an automatic home run over the centre oufield fence to score two runs. Horowai Puketapu then hit a double before Waterhouse smashed an automatic home run to give his side a 4-0 lead.
In the fourth inning Huata smaashed another automatic with Mike Thompson and Jordan Turner on base to end the scoring