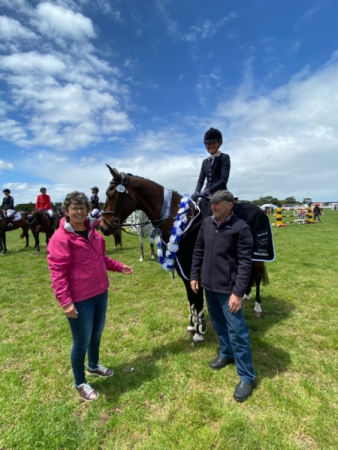 It sealed a hat trick of victories at the show for Fitzsimon who has won the prestigious class for the past three years.

She also placed fifth aboard eight-year-old Campari in their first World Cup start.

Fifteen combinations started the class with nine on four faults and less coming back to be challenged by the Gerrit Beker-designed course.

In the second round, young gun Annabel Francis (Taupo) and Carado GHP, Tegan on Windermere Cappuccino, and Brooke Edgecombe (Waipukurau) with LT Holst Andrea were all clear, but each carried four faults from the opener so it came down to time. Fitzsimon’s 50.34 second effort gave her the win ahead of Francis on 52.96 and Burnett-Grant on 53.04.

Fitzsimon was rapt with the win and particularly pleased with the efforts of Campari.

The combination had looked on track for the only double clear of the class, but a late rail dashed those hopes and they had to settle for fifth.

“He tried so hard out there and gave me 110%. It was quite a technical and tight track for him, being so green. He hasn’t done many grand prix starts and none in the premier league. From the outside I didn’t think it would suit him but he got out there and jumped really well – sure there are some things still need work but he is going to be a very cool horse in the long run.”

The effort was especially pleasing given Campari’s owners Penny and Mike Tapley had flown up from the South Island to be ringside to watch.

Fitzsimon admits she thought her quest for her third win aboard Windermere Cappuccino in the Hawera World Cup class was over when she took the third of the treble in the opening round.

“I thought I had blown it,” she said.

For the second round, she wanted a “forward but not crazy” clean effort. Their slick time surprised her. “It was quite an in your face course but rode well. It was great to win it a third time.”

Today’s win was Fitzsimon’s second in the New Zealand series, with the opening qualifier held in Hawke’s Bay last month. The next round will be at Feilding in early December.

The World Cup Series runs over six rounds with the best four to count for each rider.

The winner of the New Zealand league usually has the chance to represent the nation at the Longines FEI World Cup Final which is scheduled to be held March 31-April 5, 2021, in Gothenburg Sweden, but with a global pandemic whether it goes ahead or not is uncertain. Fitzsimon and Windermere Cappuccino have won the series for the past two years.

In the Country TV Pony Grand Prix, four of the 10 starters came back for the jump-off where Julianne Revfeim (New Plymouth) and Spot You Later flew around to be double clear and nearly five seconds ahead of runner-up Katie Readings (Auckland) and Rump Shaker.

For full results, head to www.equestrianentries.co.nz