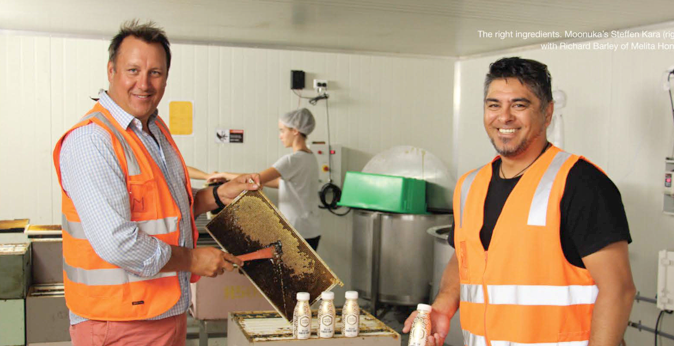 Hawke’s Bay: the land of (combining) milk and honey

Relationships have been the key ingredient to launching the world’s first milk and Manuka honey drink, Moonuka Milk.

This article first appeared in The Profit, inspiring business in Hawke's Bay.

It’s been a long journey but the three friends have now found the perfect milk-to-Mānuka honey formula and have created and trademarked the drink that has been strongly influenced by several Hawke’s Bay businesses.

Steffen says that although he thought the idea of a milk-based drink was not necessarily a moneymaker, Gareth thought otherwise and spent many nights in his apartment kitchen trying to find the perfect balance of milk and honey.

“It was back in 2012 when we sat in Gareth’s apartment in Auckland and brainstormed a wide range of ideas, one of which was a milk and honey drink, which I didn’t think that much of but Gareth did.”

However, nothing came of any of the ideas for about four years until Gareth decided to start mixing milk and Mānuka honey in his kitchen. He then convinced Steffen that it was worth further developing and backed his hunch by trademarking the product in China.

The product was taken to Massey University’s FoodBowl, an open access food processing facility operated by NZ Food Innovation to perfect the flavour and undertake a full trial.

If it hadn’t been for Steffen’s relationship with a former neighbour, Moonuka may have ended up with a different taste profile to the finished product, which is currently being taste-tested by friends in New Zealand as well as samples being passed around to distributors in China and parts of Asia.

“We were pretty happy with it [the taste] but we wanted the drink to be in a bottle rather than in a Tetra Pak carton.

“We had created a high-value product using Mānuka honey and it would have been a shame to then put it into a carton.”

Steffen went to see Neil McGarva, his former neighbour and the founder and owner of Envictus Diary NZ based in Whakatu, Hastings.

Neil established New Zealand’s first state of the art UHT aseptic PET bottling line for dairy, juice and water in 2011 and Steffen was keen to see if Moonuka Milk could be bottled using Neil’s technology.

A key benefit would be to use UHT heat treatment to extend the shelf life of the drink from around a week to at least 12 months.

It would also enable the PET injection moulding to create a ‘milk bottle’ look that Steffen and Gareth desired.

What they didn’t expect from Neil was a suggestion of changing from standard milk to full cream milk, a decision that they believe will be the export success of the product.

“Neil liked the mix of milk and honey but he asked what our target markets were, which we named as South East Asia and China, to which he suggested we use full cream milk instead.

“He said they liked the taste of full cream milk, so we did a batch at Envictus and it was perfect.”

Working with Envictus enabled Gareth and Steffen to keep true to their brand’s vision of using recyclable packaging.

Two other local businesses have also been instrumental in the product’s development. An old work colleague of Steffen’s created the brand and the bottle design, based on a brief of being authentic and having a strong Maori culture focus. The Mānuka honey has also been sourced locally from Melita in Manchester Street, Hastings.

“George Williams from Blackdog Design did the branding and has brought our vision to life and created an amazing looking bottle.

“We also decided that if we were going to make the product in Hawke’s Bay then we should try and find a local honey supplier. Hawke’s Bay is the food bowl of New Zealand and I wanted to be able to promote as much of the region’s products as possible.

“Mānuka honey is a big cost, especially when it comes to formulation when you’re doing big volumes, and it was great that we met the guys at Melita, who’ve been really helpful in getting our trial up and running. To be honest, the Mānuka honey from Melita is the star ingredient,” he says.

A trial batch isn’t about taking a few dozen bottles around to supermarkets; they needed to produce the equivalent of a 40-foot shipping container of Moonuka Milk, which costs, as Steffen says, “a heck a lot for our first production run”.

This is where Greg became part of the mix as the money man and also his experience in business ownership and sales acumen. Greg, a semi-retired Aucklander, approached Gareth and Steffen after tasting the product, seeing the brand and then engaging in some “tough” negotiating on his shareholding.

“Greg’s decision to work with us was like the stars aligning and perfect timing for us all; it enabled us to quickly do our first full production run with Envictus.”

Now the hard work begins in convincing international distributors to promote it and New Zealand retailers to stock Moonuka Milk on their shelves. They have successfully gained a contract to supply all Farro Fresh food stores in Auckland and some speciality food stores like Haumoana Burger, Pixie Bowl and Switch Coffee in Napier, just to name a few.

“Our aim is to produce four container loads a month, or about 250,000–300,000 bottles, that’s our target. We have got to get China’s CIQ accreditation, which will enable us to export Moonuka Milk, and then that will enable us to get further access into Asia.”

Steffen also hopes that Moonuka Milk can join the Hui Māori Collective, the first Maori business collective to have a presence on one of China’s main e-commerce platforms, Tmall Global, which is part of the Alibaba Group.

“It will be great if we can join the collective as it will enable us to further tell our brand story, Tehei Mauri Taiao, which has several meanings including ‘a breath of nature’s elixir’ and ‘cheers and good health to all’,” Steffen says.

For Gareth, Greg and Steffen, the horizon above the land of the long white cloud looks more like a sea of NZ’s finest white creamy milk and golden Mānuka honey.