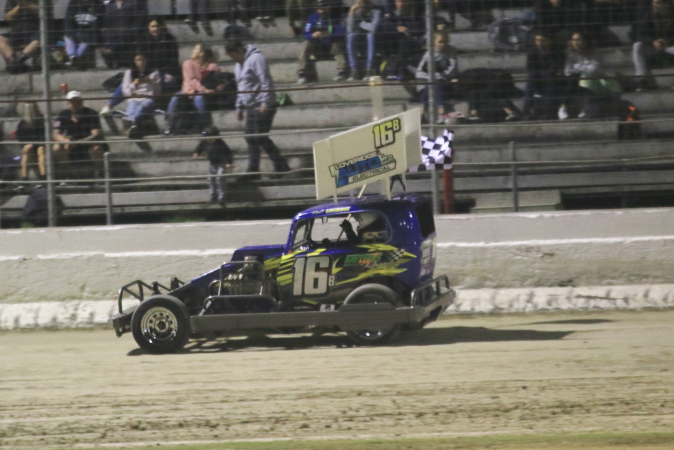 The oldest of this season's Maulers squad at 28, Loveridge, recorded first, second and fourth placings in the 35-car championship. Because the electronic lap scoring system wasn't working last night, because of flood damage, Loveridge and his fellow competitors didn't find out the final placings until this morning but he had an inkling.

"I had a fair idea I would be up there so I just did what I had to do in my last race," Loveridge said.

The 2013-14 season winner of the title agreed the fact he was the meeting sponsor through his Loveridge Auto Electrical business might have worked in his favour.

"If the other drivers continue to leave me alone like they did I might have to sponsor more meetings," he quipped.

Loveridge won the title by six points from Stratford-contracted Hawke's Bay driver Karlin Painter-Dudley who is in his first season in the class after leaving the mionistock ranks.

The Maulers did well to make sure the title remained in the Bay. Daniel Melling put heat one winner Jason Lovell of Gisborne up the wall in heat three.

Quinn Ryan won two of the heats in the 10-strong superstock class and his Hawke's Bay Hawkeyes teammate Thomas Stanaway took out the other. Hawke's Bay's former 3NZ

Brent Redington won two of the three heats in the 11-strong streetstock class and clubmate Darren Melling the other.

Gisborne's Seth McKay had two wins and Whanganui's Brent Hackett the other in the 14-strong production saloon class.

Hawke's Bay's Tony Mechan had two victories and Gisborne's Dylan MacGregor the other in the 16-strong TQ class.