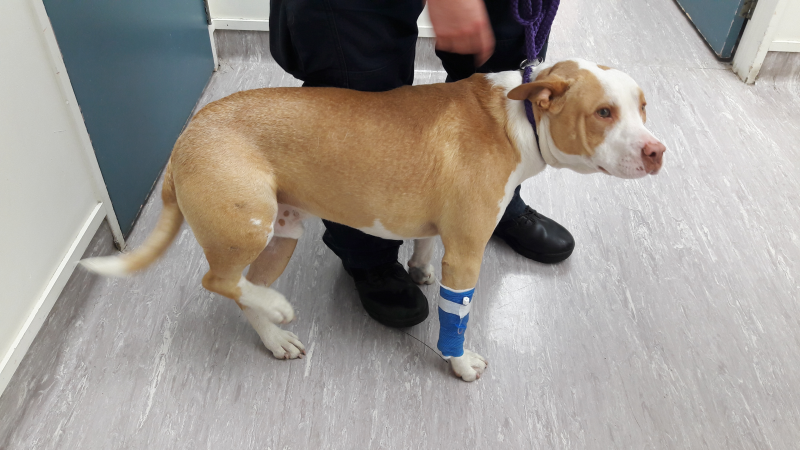 Rocka, whose owner has been jailed after breaking the dog’s leg.

A man has been prosecuted by the SPCA and jailed for breaking his dog’s leg, and failing to seek veterinary assistance after doing so.

Serrin Macpherson was sentenced in Wairoa District Court yesterday. He was sentenced to 12 months’ imprisonment, disqualified from owning animals for 6 years, and ordered to pay $1,780.41 in reparations.

The case began in November 2017 when the defendant let his dog Rocka get out from his property in Papakura.  Rocka and a second dog subsequently attacked livestock at a nearby property.

Upon catching Rocka back at his property, the defendant attacked Rocka by punching, kicking, and slamming him to the ground, breaking his leg. A witness attempted to intervene but the offender continued the attack.

SPCA Inspectors visited the defendant and he provided false information about Rocka, telling them that he had euthanised the dog and disposed of him. He eventually admitted that Rocka was in his vehicle, injured and had not received veterinary treatment.  Inspectors saw that Rocka’s right hind leg was obviously and extremely swollen, and Rocka wasn’t placing weight on it.  Rocka was surrendered into the care of SPCA.

The veterinarian who examined Rocka confirmed a broken femur and said he would have suffered severe pain at the time of the fracture, up until he was treated by a vet. Unfortunately, due to the extent of his injuries, Rocka was euthanised and a post mortem revealed there was wide spread haemorrhaging consistent with blunt trauma.  In the veterinary pathologist’s opinion, the injuries and lack of treatment would have caused severe pain, distress, and suffering.

"This type of offending is particularly horrific as the offender not only violently attacked his own animal, he failed to provide critical medical care after the fact, and lied about it to authorities, leading to a huge amount of suffering for Rocka," says Andrea Midgen, SPCA CEO.

"We are pleased that the court has recognised the significant pain and distress and extreme violence in this case, and this is reflected in the imprisonment sentence handed down.  Let this be a warning: anyone who treats their animals in such a way will be prosecuted by SPCA to the full extent of the law."