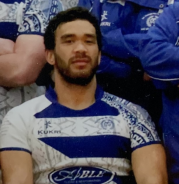 "It's a totally different feeling. There was a little bit of belief there after we closed the gap just before halftime," Tanalised Napier Pirate Rugby and Sports assistant coach Spencer Bethell said after his team's 31-27 victory over Enviro Clean and Restoration MAC at Tamatea Park in a seventh round Maddison Trophy clash.

The fact it was blindside flanker Gerome Naera's 100th match for the side and substitute loosie Ryan Gardiner's 50th assisted the hosts big time.  Naera played with the enthusiasm of a first-season player.

For MAC first five-eighth Jackson Waerea, who was also playing his 100th match, it wasn't the result he wanted.

"We were unlucky. But that's the story of our season ... apart from the losses to Hastings our defeats have been pretty close. But whether it's by three points or 60 the feeling is still the same," Waerea said.

He made his premier debut in 2006 and the 32-year-old pointed out he will be around for another two seasons at least.

All Black Sevens representative Kurt Baker got an ugly but winning welcome to the Altherm Window Systems Napier Technical side with this Central Park victory.

"There was a bit of niggle as well as an all-in scuffle. Two of our players [winger Penikolo Latu and lock Izzy Martin] were red carded and our halfback [Sheridan Rangihuna] was yellow carded. One of their players were yellow carded too," Texans manager Cyril Whitburn explained.

Halfback Tim Sciascia and second five-eighth were the pick of the Northfuels Central backs.

Taradale Rugby and Sports co-coach Tim Combs had every right to salute his tight five after this Tareha Recreation Reserve victory.

The host team's tight five was the difference between the two teams and allowed the hosts to starve the classy Andrew Clark Tremains Clive Rugby and Sports backline of possession. Loosehead prop Namatahi Waa ticked every box during his 80 minutes.

"We defended really well in the first to trail 16-7 at halftime but we didn't turn up in the second half," Clive coach Vaine Maui lamented.

Leading by example in this department was openside flanker Jardine Chung Ching. Miracle Lolofie, who had stints at flanker and hooker, was also prominent.

Halfback Connor McLeod, who finished with 20 points from two tries and five conversions, and second five-eighth Antonio Mikaele-Tu'u were the best of the Hastings backs.

"They are a well drilled machine. That Pouvi Fatialofa at openside flanker was outstanding for them," Kirikiri said.

"We've had a lot of injuries this season and the final score reflects the difference between a team with a lot of money and a side with not so much," Kirikiri added.

Former outside back Bayden Barber, 47, had to play 80 minutes at lock. Another on the wrong side of 40, former Magpies winger Jason Robinson, played as a substitute openside flanker and martial arts exponent Dan Digby, who turned up to watch, played 80 minutes at lock.

Along with Fatialofa prop Lee Moleli was devastating for the hosts. Former Magpies halfback Ellery Wilson shone in both inside back positons and fullback Ryan Lindesque did well to clock up 70 minutes after plauying 80 minutes for the colts.
Scorers:
Napier Old Boys Marist 121 (Not supplied), Tamatea 7 (Tre Barber try; Ash Robinson con). HT: 52-7.