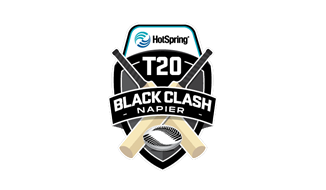 The popular battle between two codes will be held at McLean Park on January 17.

The Hot Spring Spas T20 Black Clash is back for 2020 with the now annual cricketing battle between New Zealand’s most-loved codes to take place in Napier on January 17.

McLean Park will host the second T20 Black Clash after the inaugural event smashed it out of the park in Christchurch. The successful 2019 event was a sell-out and was watched on TVNZ 1 by over a million Kiwis, the highest TV audience for a cricket match in New Zealand in over a decade.

Tickets for the match on January 17 go on sale tomorrow via Ticketek.

Team Rugby is again expected to host a line-up of the country’s top rugby talent, with the 2019 event attracting the likes of All Blacks Kieran Read, Beauden Barrett, Jordie Barrett and Aaron Smith and legend Richie McCaw as well as former All Black and accomplished junior cricketer Israel Dagg.

Team Cricket will want revenge in the upcoming 2020 clash in Napier to defend their reputation, with the star-studded side featuring former Black Caps Stephen Fleming, Nathan Astle, Chris Harris, Kyle Mills, Luke Ronchi and Grant Elliott going down to Team Rugby by 5 wickets in the inaugural 2019 match.

Coach/Player Fleming and supercoach Sir Graham Henry will once again take charge of Team Cricket and Team Rugby respectively as the two teams battle it out for the Crowe-Lomu Trophy.

In 2021, the Hot Spring Spas Black Clash will then return to Christchurch, which hosted the highly successful inaugural edition of the event where Team Rugby claimed bragging rights.

With hosts Napier and Christchurch confirmed for 2020 and 2021 respectively, the nationally embraced event will alternate between North and South Islands allowing Kiwi’s across the country to get involved in the unique and fun event.

Duco founder David Higgins said: “The first ever Hot Spring Spas T20 Black Clash was a smashing success. The cross-code event was able to attract the star names – Read, McCaw, Fleming, McCullum and the Barrett brothers to name just a few. The event was a sell-out in its first year and generated the highest broadcast audience for a cricket event in the last decade.”

“Duco Events is delighted to bring what I call a unicorn event to Napier and in 2020 we will again be delivering the top stars, a competitive match and an entertaining day out for everyone.”

“Duco Events thanks Napier City Council for getting behind this event in 2020, and we are also excited about a return to where it all started in Christchurch in 2021.”

Kevin Murphy, Event Manager for Napier City Council, said: “We are very excited to secure this event for Napier – it is fantastic to see this unique event for both Rugby and Cricket fans. I am sure the fans will be rapt to watch some legends of their codes compete at McLean Park.”

Karena Finnie, Christchurch NZ Head of Major & Business Events, said: “Ōtautahi Christchurch welcomed over 9,000 people to Hagley Oval for the inaugural Black Clash event in 2019, and we’re thrilled to bring everyone back to one of the finest cricket grounds in the country in 2021.”

“Canterbury has a long and proud history in both cricket and rugby, and Black Clash is a great way to combine the two. It’s a fun and unique addition to our strong summer events calendar.”

Hot Spring Spas has again shown its support for the innovative concept, reconfirming it’s Naming Rights partnership with Duco Events for the event.

Aaron Sampson, Hot Spring Spas General Manager said: “We are so excited to again be involved in the T20 Black Clash.  This year’s event in Christchurch was absolutely amazing. We saw thousands of people come together to connect and enjoy what was undoubtedly one of the best sporting events of the year.”

“The fun, the laughter, the competition and the camaraderie all combining to make everyone's day so enjoyable and just that little bit better. That's what we at Hot Spring Spas are all about, making the Everyday Better. We are certain the 2020 Hot Spring Spas T20 Black Clash is going to be bigger and better and we look forward to seeing you all there.”

In addition to Hot Spring Spas, the event would not be possible without the huge support of the New Zealand Cricket and Rugby Players Associations. This great partnership saw the 2019 Hot Spring Spas T20 Black Clash generate $100,000 that was invested back to the Personal Development programmes and Past Player Hardship Trusts for both cricket and rugby.