A tall order: Firefighters extricate man 10 metres above the ground in “once in a lifetime” job

Firefighters tending to a car that ended up lodged in a Hastings orchard’s bins, had to secure the crates before cutting off the car’s roof to get the man out, all while 10 metres above the ground.

FENZ Hawke’s Bay Assistant Area Commander Glen Varcoe said it was a “once in a lifetime” scenario that brought all their years of training to the fore.

Prior to becoming airborne at 12.30am this morning police said the vehicle was seen driving at speed on the wrong side of Karamu Road and failed to stop.

It fled down Kenilworth Road, hit gravel at the base of railway lines, became airborne and went over a fence, crashing into a stack of fruit bins, ending about 10 metres above the ground, police said.

Varcoe said by nature the job was “very technical” and used all eight firefighters at the scene.

“They used 10.5m extension ladders to gain access and ropes and lines to get all the equipment up there. So they actually extricated him from the car, took the roof off, put him into a stretcher and slid the stretcher with ropes down the ladder and obviously, the ambulance took him to hospital.”

Varcoe said the ordeal took about an hour. Before they were able to make any decision on how to bring the man to safety, crews had to first gain access to the scene by cutting down the fence in between and cross the railway lines. 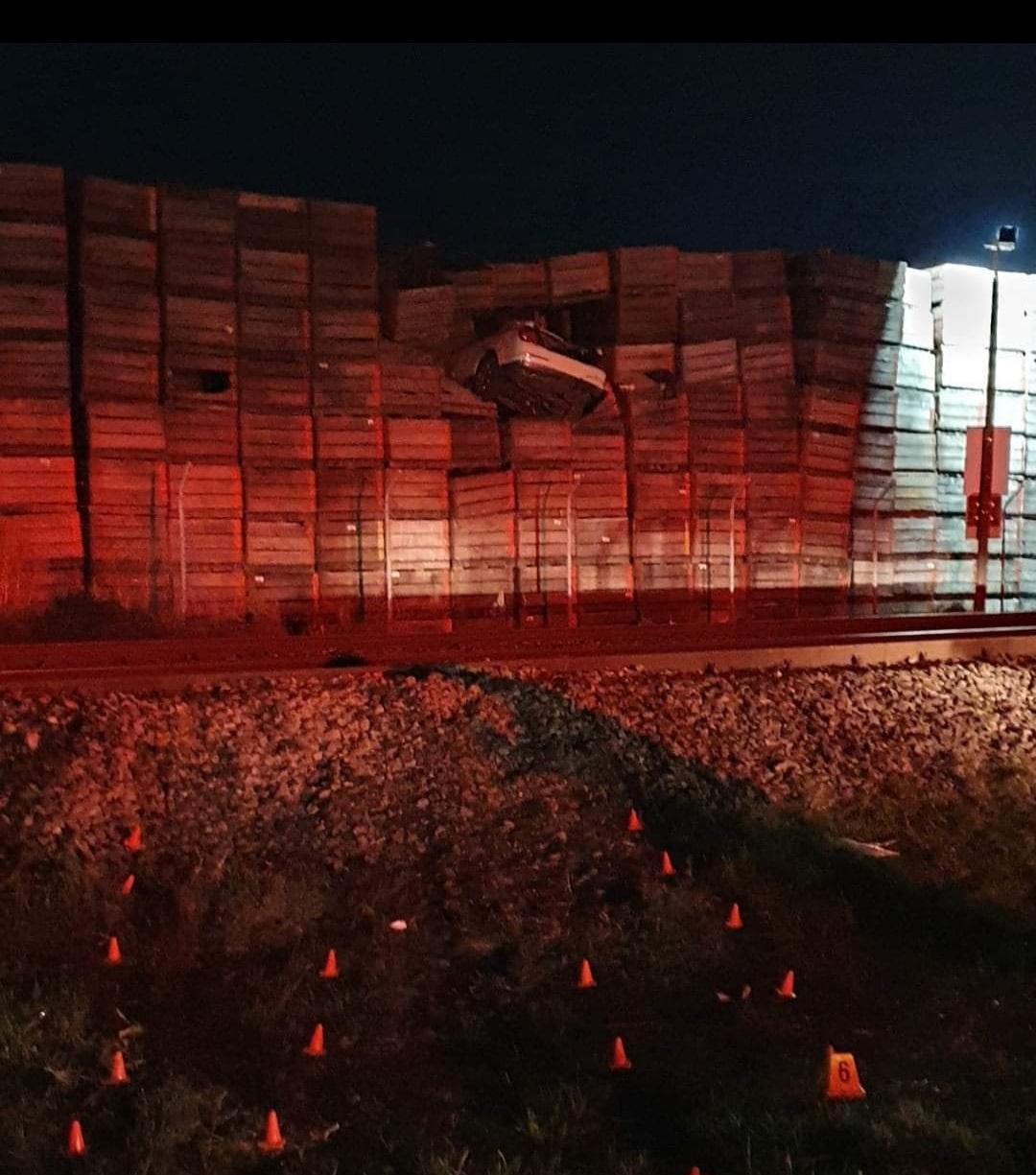 Varcoe said the crews did a “pretty good job considering”.

“We’re lucky there was no railway action until six this morning I think, so that was clear but I’m sure the railway yards have gone through and they would have had to do an assessment on the line before they could put another train through on the line as well this morning.”

They had to then screw all the bins together to “provide a good working platform and stability” because the bins were “all over the place”.

“The difficulty was getting the access and then obviously normally we would be cutting the car up on the flat surface so having to work in and around the bins was a bit of a feat. All eight of our firefighters were being utilised.”

They had to haul their hydraulic cutting gear and hand tools up to the platform by rope or up the ladder.

“It was a feat in itself just getting all the equipment up so they could actually cut the car up and get him out,” he said.

The incident was one, he had never encountered before, and probably never will.

“It’s probably a once in a lifetime type of scenario. You wouldn’t get too many like that, so it definitely puts all the skills of the firefighter to the test.

"It's bad for the public, but we quite enjoy being able to solve these sort of problems that puts all our years of training to the test and that training comes to the fore when something like this happens."

Once the man was in the ambulance, FENZ handed the scene over to the police to conduct their investigations.

Police say investigations in the circumstances of the crash are ongoing.

A Hawke's Bay District Health Board spokeswoman confirmed late this afternoon that the male, in his 20s, was in a stable condition.