A boardwalk commissioned in response to calls from community members to make the area safer for users has officially been completed.

A ribbon cutting and blessing ceremony was held on Saturday for the Tauroa Reserve Boardwalk, which runs along Tauroa Rd, between the Chambers carpark and Tokomaru Drive The first stage of work ultimately gives walkers and cyclists safe and scenic off-road access to Te Mata Park.

Hastings councillor and Active Transport Group chair Damon Harvey said the new addition meant there was now a safe way to get to Te Mata Peak that was close to the village, rather than driving to the carpark to go for a walk or bike ride.

“The area that used to be the most risky is now really user-friendly – and not only is it safe, it’s an attraction in itself, you feel like you are walking or biking through the tops of the trees.” 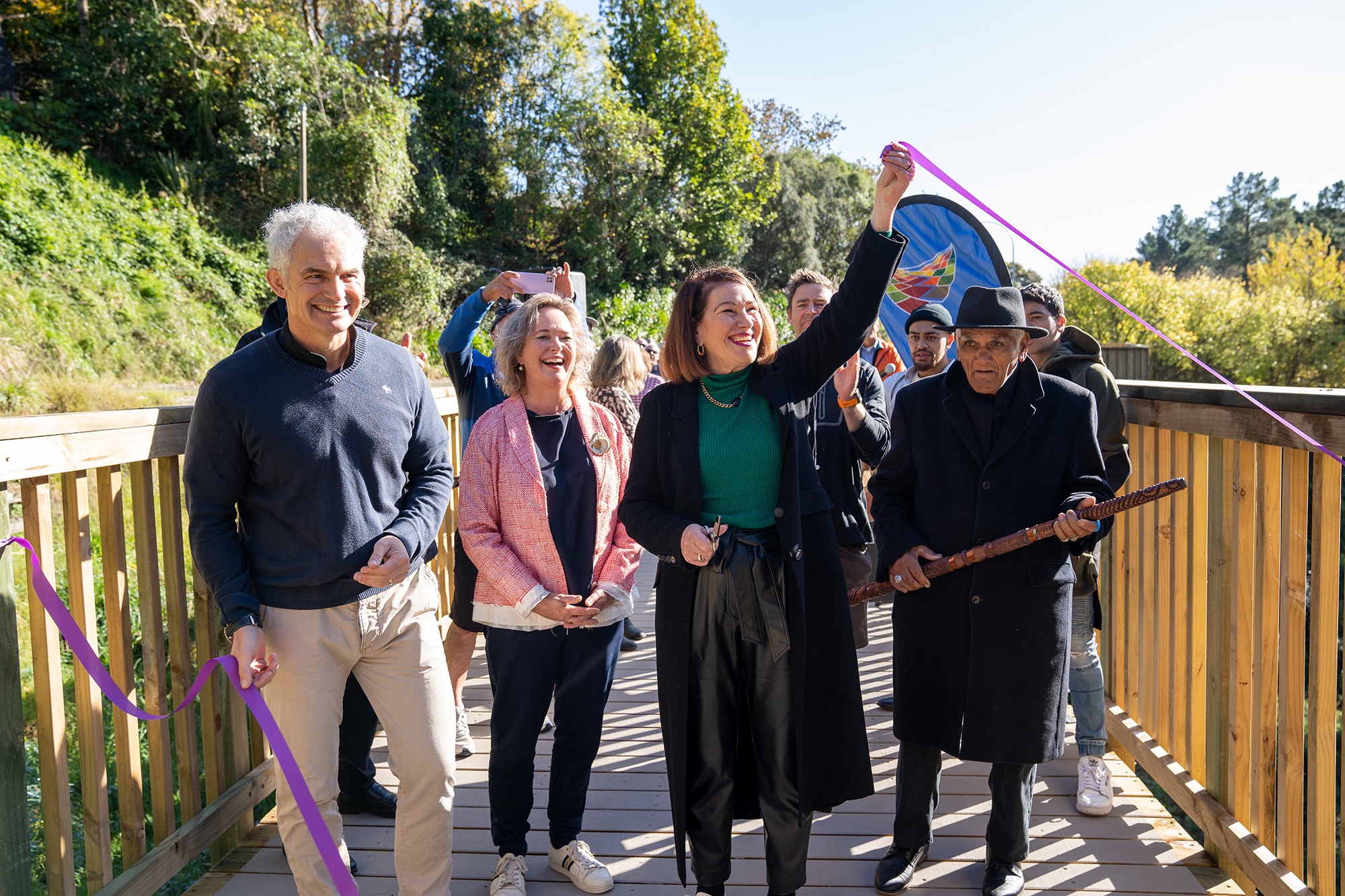 The boardwalk build started in February 2021, but due to Covid-19, took longer than predicted, with delays getting materials, wet weather, and working around keeping access open to motorists.

Built over undulating terrain, more than 160 poles, ranging from four metres to 12 metres in height, were used in its construction. It is also three metres wide to accommodate respectful usage by both pedestrians and bikers.

The total cost for the project from design to completion, including the removal of some trees in the reserve, was $1.9m. Of that the Provincial Growth Fund contributed $400,000.

Napier MP Stuart Nash, also the Tourism and Regional Economic Development Minister, attended the official opening and said it was a bittersweet event, marking an end and a new beginning.

“It marks the completion of a wider two-year $9.37m programme of investment and support where the government worked alongside the Hastings District Council to redeploy workers who lost jobs in the first wave of Covid-19 in early 2020 – this particular project provided jobs for 13 people for nearly a year.

“Te Mata Peak is an iconic visitor attraction in Hawke’s Bay. The completion of the boardwalk comes at the perfect time as we reconnect to key international tourism markets and reopen to cruise ships, and is
also a fantastic new asset for the community.” 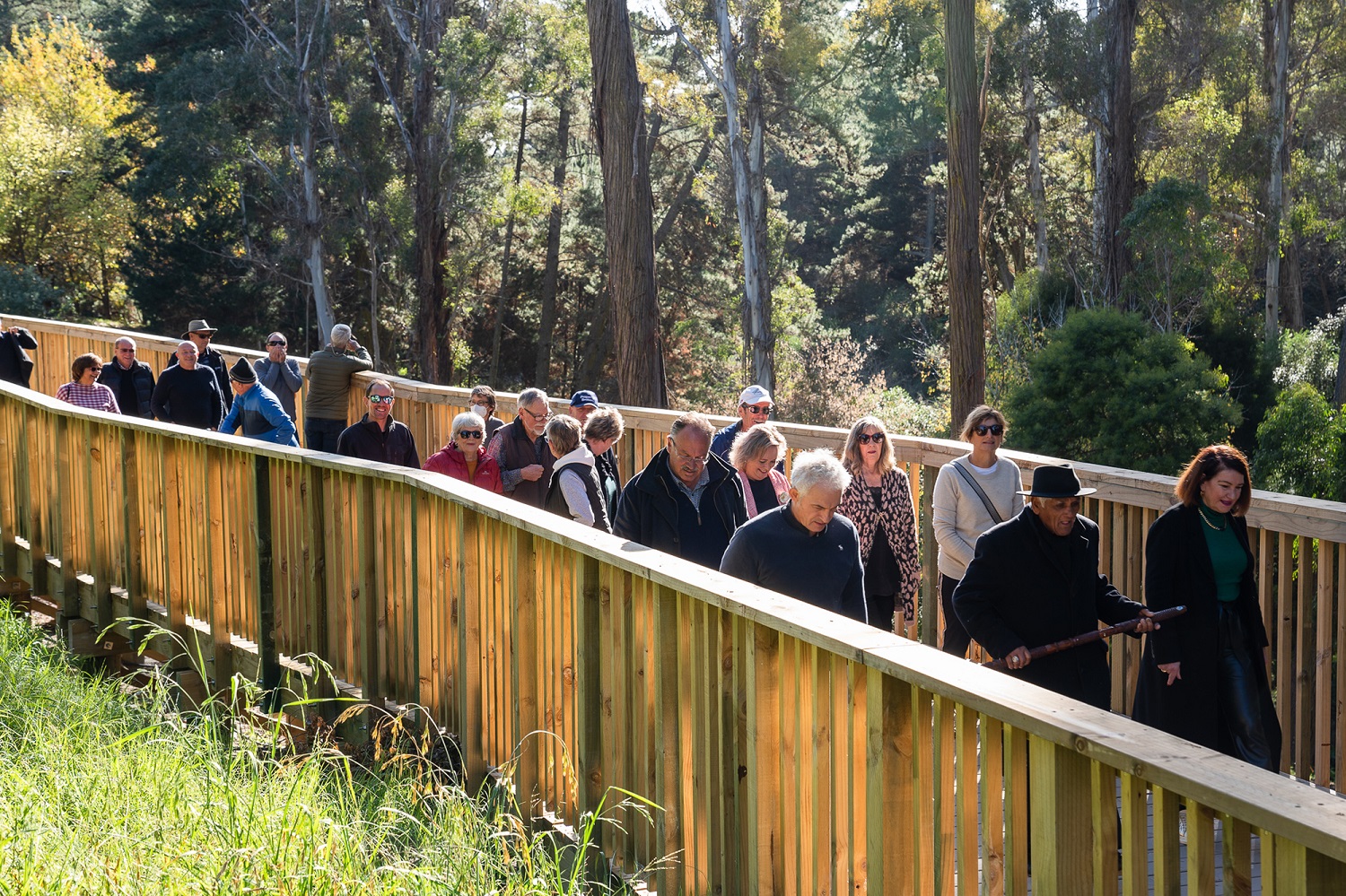 After the ribbon cutting, attendees of the opening ceremony walked the Tauroa Reserve boardwalk. Photo/Supplied.

For those who first called on the Council to find a safety solution for the road, its completion is indeed something to celebrate.

Tauroa Reserve Care Group member Michelle Hicks said the death of her Property Brokers colleague Megan Nation in a tragic accident in 2018 highlighted safety concerns about this piece of road.

“Council was looking into it and we put forward the boardwalk idea,” she said, on behalf of the care group.

“We have been watching the progress of it being built over the last 18 months and are pleased it’s in place now - we hope it’s treated with respect.”