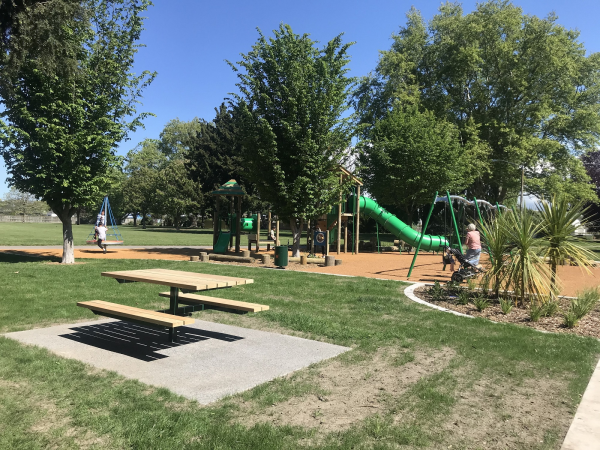 Ebbett Park has a new playground, and to celebrate a public opening day will be held on Wednesday, October 28.

Earlier this year, Hastings District Council consulted with the community on ideas for the playground, which was ageing and in need of upgrading, in line with the Raureka Parks Reserve Management Plan.

Situated close to both Hastings Central School and Ebbett Park School, the park boasts a number of mature, shady trees, tennis courts, and a large grassed area for games, which complement the new playground, the design of which was guided by community feedback.

Its features include slides and climbing frames, a timber tower, monkey bars, a climbing spinner and swings, along with new seating and landscaping.

In addition to the playground upgrade, Council is also installing new park furniture and a new toilet and carpark (off Gordon Road) so park users can enjoy the new revitalised space.

The opening celebration will be held between 3pm and 5pm on Wednesday, October 28, and there will be a sausage sizzle and other activities.

Hastings mayor Sandra Hazlehurst said it was exciting to have the upgrades completed and ready for the community to use.

“We warmly welcome the community to join us and celebrate the work that’s been done for the ongoing enjoyment of children and families.”

Ebbett Park has a rich history, the land for which was donated in 1924 by Eliza Maud Ebbett (nee Neal, daughter of a Napier merchant) and was named for her husband George Ebbett.

He served as a councillor for the Hastings Borough, and was later Mayor from 1919 to 1921. He was also a sheep farmer and sportsman.

The area was opened as a park in 1927, and included a children’s playground and trees planted around the boundary. Several machine guns from WWI were placed under the gum trees.

Three tennis courts were built, and the distinctive entrance to the park was a gift from George Ebbett himself.

The Māori carvings he had initially purchased for his own garden were given to the city for the park, and after being restored by Māori carvers, were put on display in the Hastings District Council building foyer and the Hastings library in 1983, where they have remained ever since.