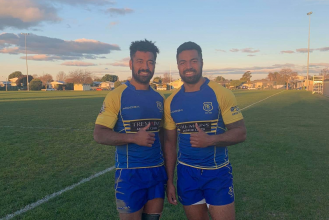 Sebastian Visinia (left) and brother Lolagi will be playing for Clive tomorrow but not as midfield partners.

He was hoping to have the Visinia brothers, captain Sebastian and former All Black Sevens and Blues player Lolagi, in the midfield for tomorow's feature seventh round Maddison Trophy clash. Maui's fourth placed Andrew Clark Tremains Clive side will take on second placed Taradale Rugby and Sports at Tareha Recreation Reserve.

However with regular pivot Tianua Poto out for the season with a knee injury and Chiefs and Magpies utility back Tiaan Falcon also on the injured list Maui has shifted Sebastian into first five-eighth. Hurricanes and Magpies outside back Jonah Lowe will move in to second five-eighth as a midfield partner for centre Lolagi.

"I would like to think we will have the edge in the midfield," Maui said.

"Not turning up in patches saw us lose to Hastings and Napier Old Boys Marist earlier in the season. We know we have to play for the full 80 this weekend," Maui said.

"I'm expecting a backlash from Taradale after their loss to Hastings last weekend. They are still the team to chase ... they didn't win their first five games for nothing," Maui added.

Taradale co-coach Tim Combs was confident his troops could bounce back from their 35-10 loss to Hastings Rugby and Sports.

"We don't have any choice. There's nothing like the hurt of a loss to get us going. We've got everything to play for. We were only 5 per cent off against Hastings who played very well."

"We've just got a number of little things to continue to tweak. We were guilty of drifting in and out of the match against Hastings," Combs added.

Magpies head coach Mark Ozich is eager to see how Taradale respond to their sole defeat. He will be paying close attention to Samasoni's form and the output from Taradale props Namatahi Waa and Joe Apikotoa.

Ozich also confirmed the Magpies will have two pre-season games against Waikato on August 28 and Auckland on September 4. Both are Friday fixtures and will be played in Taupo.

Players involved in the Maddison Trophy final on August 29 won't be considered for the Waikato game.

"We know this is a big game for us in our quest to reach the semifinals and the boys are up for it. Kurt mixed in well with the boys and gave them a boost. The plan is for him to play a couple of games during the coming weeks to be eligible for the semifinals," Cushing added.

Enviro Clean and Restoration MAC utility back Jackson Waerea will become his club's third centurion in the last 10 years when his team takes on Tanalised Napier Pirate Rugby and Sports at Tamatea Park. While Waerea wll play his 100th match for the side flanker Willy Benson and prop Paula Latu will both play their 50th and blazer games.