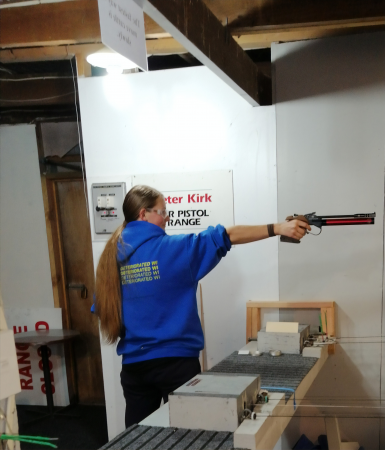 A Sacred Heart College student has her eyes set on competing in shooting on the world stage, having just won her first competition.

The 16-year-old also placed fifth overall. Students competed at their own Pistol NZ club before all scores were tallied together.

Charlee, who was the only student from Sacred Heart College to compete, says she “never expected” to win a trophy.

“At the start, my sights were actually off, so I shot two targets with my sights off but then we fixed that, so it didn’t really affect me too much.”

She plans on competing at the 2020 North Island ISSF Champs later this month, which will see all competitors shoot at her own Hawkes Bay Pistol Club.

Now that she has competed in her first competition, she is no longer considered a novice and will be ranked.

While she had thought about getting into the sport for “a while”, Charlee says it was not until she accompanied her friend to the shooting range when she decided to go for it.

She quickly got a coach, Martin Gugich and has not looked back since. Charlee trains every Wednesday and Sunday after school and does exercises to perfect her performance.

However, it is not the only sport that Charlee has fallen in love with. She also competes at a high level in horse riding.

Currently in year 12, she plans on leaving school next year to focus on working and seeing where her sports take her.

Although there is no shooting club at SHC, one teacher has expressed interest in starting one, and Charlee is keen to help out wherever she can.

She believes others, especially more girls, should get into the sport.

“It teaches you a lot of things, especially patience and focus, and it’s got a lot to do with your mind and mental toughness, as much as it has to do with your body and fitness,” she said.

Mr Gugich said: “For a girl who hadn’t shot a tremendous amount, she did incredibly well”.

He says Charlee’s strength from horse riding has helped her considerably and meant she has been able to enter competitions fairly quickly.

“She’s shown a lot of promise.”

He coaches a number of students and school teams and is hoping it will “grow more” within the school-age group.

Charlee’s mother, Andrea Pearson said she is “really proud” of her daughter, and says she is “very dedicated” to the sport.