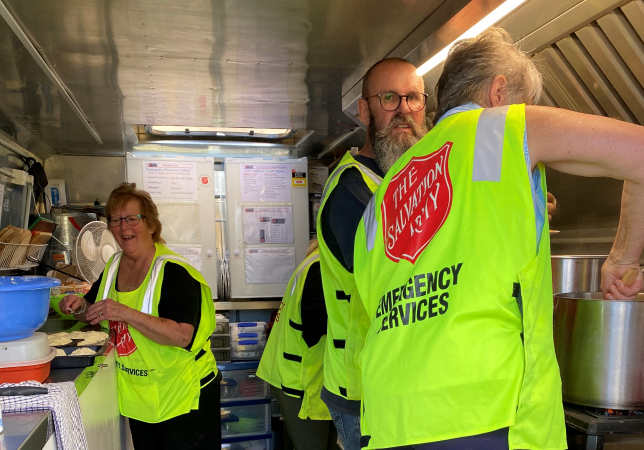 The Salvation Army crew at work in their mobile catering truck, feeding the firefighters.

Salvation Army steps in to feed the Tangoio fire teams

Hamburgers, sausages, pies, bread rolls and chicken pasta are all on the menu for firefighters working on getting the Tangoio fire under control.

Fifty-five Fire and Emergency firefighters, plus support staff and Pan Pac and Forest Management New Zealand fire staff are into their third day of fighting the blaze.

“We are incredibly grateful for all the hard work that all of these people are putting in to extinguish this fire. Everyone from the firefighters, water tanker drivers and the bulldozer drivers, to the helicopter and plane pilots, and all those in between.”

This sort of event shows just how close and supportive our community is, Mrs Hazlehurst says.

“A prime example is the catering being provided to the front-line crews by the Salvation Army. They really are fantastic.”

Co-ordinator Craig Campbell says the service was called in on Monday. Since then rostered teams of up to seven had been cooking up a storm.

The service’s largest truck is an ex-fire services command vehicle that the Salvation Army has converted into a fully equipped commercial kitchen. It is one of a number of vehicles the organisation has for helping out in emergencies, including a smaller field kitchen, a catering caravan, and a trailer. Back-up equipment, including barbecues and portable ovens, is also in the armoury.

“They are being really well fed, which is very important when they’re doing such hard physical work,” says Mr Campbell. “It’s about supporting these people who are on the front line.”

The catering teams are a welcome sight at emergencies across Hawke’s Bay.

Incident controller Trevor Mitchell says it is a great service “much appreciated by the guys out there on the hill ... it is fantastic that they can get good hot food through their shifts”.

Without the Salvation Army, it would be difficult to get a consistent supply of hot meals out to the people in the field in such remote places, he says.

The most recent update from FENZ this morning reported improved weather conditions meant it was unlikely helicopters would be needed today.

"We ask that people stay away from the area while our personnel work to bring the fire under control," says Mr Mitchell.

People should expect to see some smoke as some of the forest skid sites (areas within a forest where harvested logs are processed) burn over the next few days.

"Our crews will be focusing on the fire perimeter before being tasked on these areas," says Mr Mitchell.