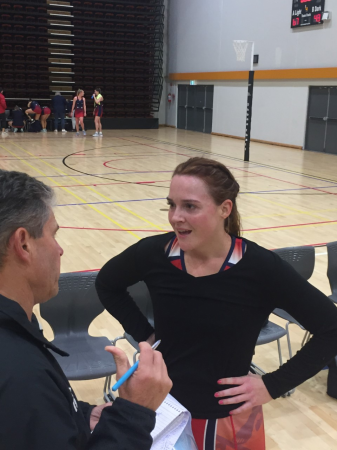 HHSOG Huia goal attack Alice Horne gives me her take on the 42-all draw with defending champions NGHS.

Hawke's Bay's Super 8 Club netball competition was always going to be tight this year and it just got closer with tonight's 42-all draw between Napier Girls' High School and HHSOG Huia.

"Next time we will beat them. We lost by one last time and tonight we drew so we're improving," experienced BM Accounting HHSOG Huia goal attack Alice Horne said after the round robin round two feature match in Taradale's Pettigrew-Green Arena.

Horne, 26, was used as a second half substitute at goal attack and sunk all six of her attempts at goal. She also impressed with her defensive workrate and composure.

Horne was quick to heap kudos on the entire Huia squad.

"We've got a good team culture and that was a good team effort. At the same time NGHS are an awesome team. We're aiming for the final and we know it's do or die from now on.

"While we like to have a giggle we want to be really competitive too. We're blessed to have Irene [van Dyk] as our coach as she brings lots to the table," Horne explained.

NGHS coach Charissa Barham was impressed with the manner in which her defending champions recovered from a five goal deficit in the third quarter as three of her midcourters, Shyan Murphy, Ashleigh Poi and Sahria Adams, had played a full game of basketball before the match.

Poi was her side's player of the match. The versatile Parris Petera, who had stints at gfoal attack and in the midcourt, was also impressive.

The other 7.30pm game saw Tremains All In Elusive maintain their unbeaten run in the round robin with a 67-43 victory over Vet Services Central Sports. All In led 19-14 after the first quarter, 32-25 at halftime and 48-37 going into the final quarter.

While Central had competitive patches in the first three quarters they offered little resistance when All In increased the tempo in the final quarter.

All In midcourters Charlotte Wilkins and Candis Timm were full of authority throughout the match. Goal shoot Pania Rowe sunk 53 of her 56 attempts for a 95 per cent success rate.

Central goal attack Kirby Beach sunk 28 of her 33 attempts for an 85 per cent success rate.