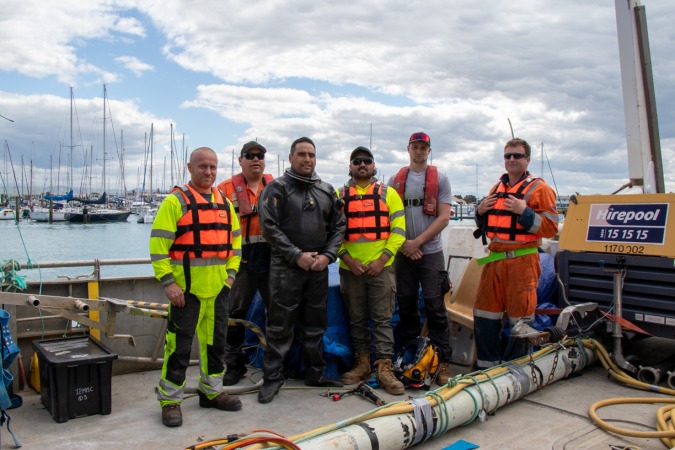 The NZ Diving & Salvage Ltd crew on board their work vessel.

The project is weather dependent and is expected to take a month. The first task will be to carry out an inspection of the diffusers at the end of the 1.5km long outfall, before work begins on the first of the leaks.

A leak in the outfall was discovered in 2018, 700m offshore at a point where the pipe was joined, followed by another closer to shore in April 2020. This repair has been planned for the last three months. Hawke’s Bay Regional Council, the Harbourmaster, environmental agencies, local iwi, and other affected parties are aware of the repair work.

Earlier this year (June) Council adopted a series of wastewater related resolutions, including starting to plan the early replacement of the outfall to minimise risks, increase levels of service and tie in with improvements to the Wastewater Treatment Plant.

The Wastewater Treatment and Outfall Masterplan has been developed and will help to determine future requirements for the full replacement of the outfall. This replacement could cost between $20 million and 40 million, and a detailed investigation needs to be carried out to both make sure the preferred option is the right one, and Council has a more accurate cost estimate. This information is likely to be available by the end of the financial year as the Masterplan targets are worked through.

Further information about the outfall replacement is expected to be included in the next Long Term Plan, in 2021. Council has set aside $2 million for the repair and $2 million to create storage for wastewater at the treatment plant to allow for future shutdowns for maintenance and repairs, and aid management of stormwater events.

The costs for the repair and the new storage is funded from reserves so there is no effect on rates.

The 1.54km long outfall pipe has been in place since 1972. The first leak occurred at the point where the two sections of pipe were joined. The fibreglass joint was installed at this point in 1984.

Council has spent close to a million dollars on proactive maintenance of the outfall in the past two financial years.