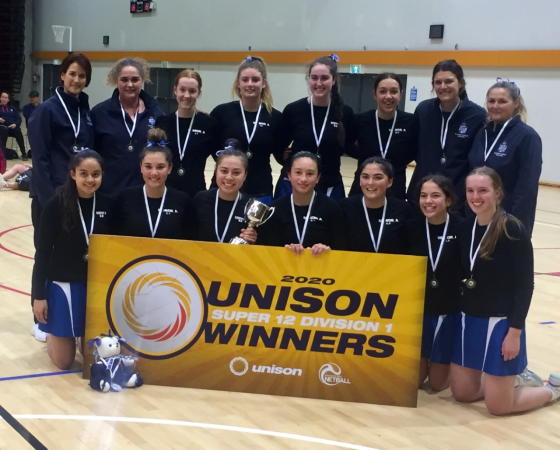 "Yes I've matched what Kimi did but more importantly we made up for the disappointment of missing out on a third consecutive Super 8 title when we lost that final to Otane earlier this month," NGHS head girl Poi explained after her side beat Hastings Girls' High School 48-28 in tonight's final in Taradale's Pettigrew-Green Arena.

"It was awesome to have all our supporters here tonight as most of the Super 8 was played without crowds because of Covid," Poi said.

Like the other member of the NGHS team who tasted title glory for the third consecutive time, versatile midcourter Parris Petera, Poi, will move to Canterbury next year. She will start a Bachelor of Science degree majoring in Environmental Science.

"Hopefully I will have time to continue to give netball a go too," Poi said.

During the upcoming school holidays she will turn out for her school's basketball team at a tournament arranged to compensate for the cancelled national tournament.

It was the ninth consecutive title for Poi's school. NGHS led 9-7 after the first quarter, 21-11 at halftime and 34-20 going into the final quarter.

HGHS coach Denise Aiolupotea pointed out her side displayed plenty of promising signs for the future.

"We only lose three players from this year's squad next year while Napier lose seven. Next year will be our year," Aiolupotea said.

However Hawke's Bay Netball's development officer Aiolupotea, who is also a Hawke's Bay Tui rugby lock, won't be back next year as she is transferring to Wellington.

The former New Zealand Secondary Schools team coach and selector will be back in charge again.