When Hawke's Bay motorsport driver Rowan Shepherd announced his engagement to Mel Hinton last month some of his mates teased him.

They suggested the 29-year-old Karamu High School old boy may not be as sharp behind the wheel. During his practise drives for last weekend's Best Bars Toyota 86 Championship's final round at Taupo's Bruce McLaren Motorsport Park Shepherd was obviously paying too much attention to his mates' cheak.

"My best placing in practise was eighth. After my engagement I might have lost some of my talent," Shepherd quipped.

"I was really struggling but after a night with the team, we found the issues and I qualified first next morning," Shepherd recalled.

The Christchurch-based IT systems consultant for Commarc Consulting had to finish second in the final race behind race winner Simon Evans to win the Championship and he did exactly that.

Evans tried everything he could to force attacks from third-placed Brock Gilchrist and fourth-placed Ronan Murphy to try and push Shepherd back into a position where he wouldn’t have enough points to beat Evans to the title.

Shepherd, however, held on in style and took the title by just five points – his tally of 973 trumping Evans’ 968 after 15 hugely competitive races.

“There was so much going on in that final race,” Shepherd said.

“Simon was doing everything he could to back me up and get another car in the middle of us. He did really well but we got there, and that’s a credit to the team."

Shepherd (pictured above with the silverware and racing below) was full of praise for the support he received from teammate and fellow Hawke's Bay Karting Club product Murphy. 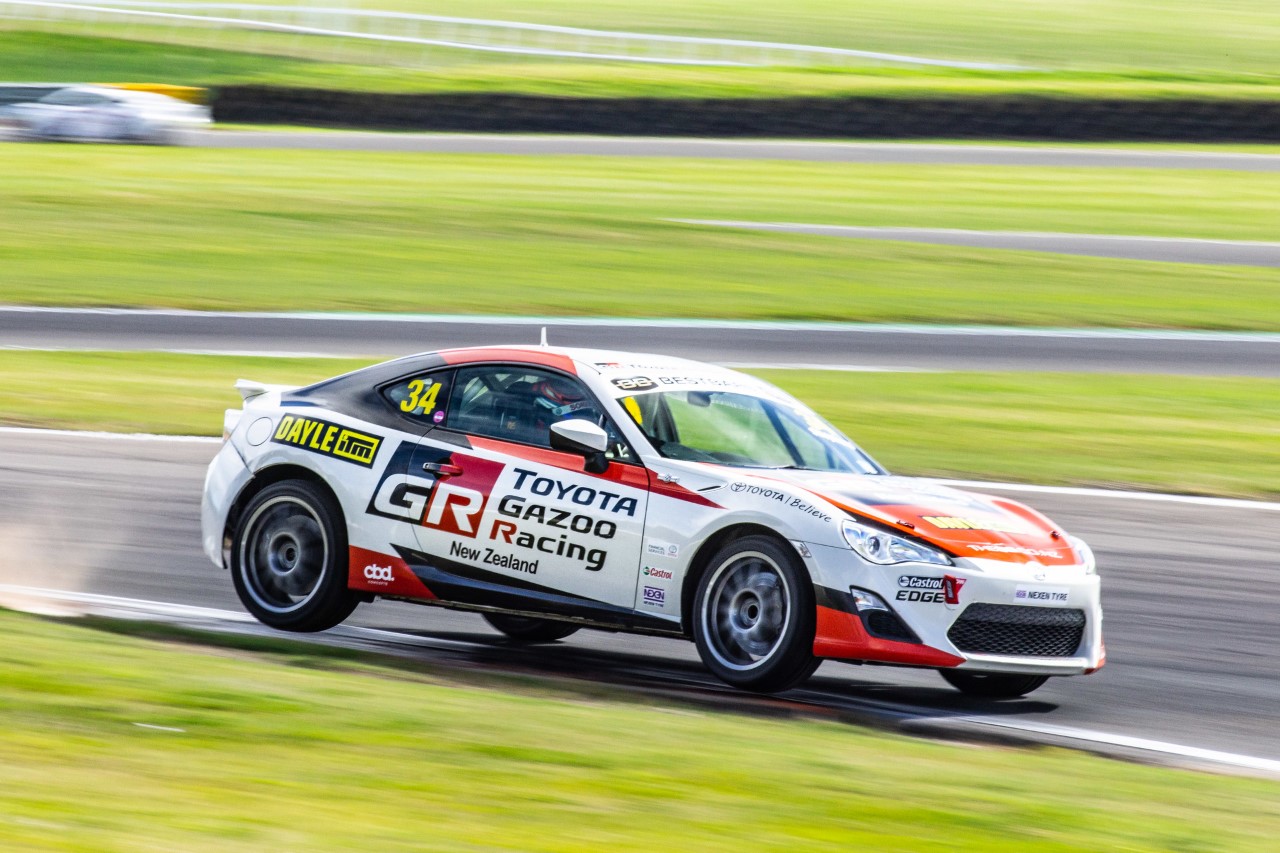 His chief title rival Ryan Wood held second early on in the race ahead of Shepherd, but any chance of taking the title was lost when contact forced his retirement late in the race. That meant third overall in the final standings.

With points scored over the weekend defining the final grid of the season, Shepherd was on pole position with Evans joining him on the front row in the Wet & Forget car. Wood lined up third for Wholesale Cars Direct, with Sunday morning race winner Gilchrist fourth in the CareVets TR86. Murphy in the Dayle ITM Racing TR86 and Justin Allen for NAPA Autoparts made up row three.

It was Evans who made the best start and he took a lead he was never to lose. He was doing everything he had to do by leading, but what mattered was what was happening behind him. Shepherd tucked in behind the leader at the start and tried to stay glued to his rear bumper, but on lap two a flying Wood found a way by, which put Evans into the championship-winning position.

Shepherd had done the maths, however, and repassed Wood within a couple of laps. Wood fought back and looked threatening but it all started to unravel for the Wholesale Cars Direct racer when he took to the grass at the final corner on lap six. He went backwards after that, falling prey to Gilchrist and Murphy and then the rest before pulling off and retiring.

Evans meanwhile, was focussing on holding up Shepherd to try and bring Gilchrist and Murphy into play but Shepherd played his cards well and stayed on the bumper of the Wet & Forget car for the rest of the race, not giving an inch let alone enough space for either Gilchrist or Murphy to make a move. As the front four crossed the line overlapping it was Evans from Shepherd, Gilchrist and Murphy.

A former two-time New Zealand Formula First Championship title winner, Shepherd, had a stint in Europe in 2019 and hopes to head overseas again once normality returns in the wake of the Covid-19 pandemic.

In the meantime, he will continue to race in New Zealand and his next assignment will be the New Zealand Endurance Championship which begins in September. This event involves shared driving duties and Shepherd will be competing for a team that will race a labogene.