Prior to the weekend's Jennian Homes national track and field championships in Hastings, Hulls, 21, was promoted as the Bay's best hope for a senior gold medal and she delivered.

A day after winning silver in the 100m, Havelock North High School product Hulls, won gold in the 200m with a personal best time of 23.21s. Aucklander Zoe Hobbs, who beat Hulls in the 100m, was second in 23.72s.

"I love running at home. I'm pretty happy but I would have loved it to be a legal wind," Hulls (pictured above, photos John Faulkner) said referring to the strong wind assistance.

Hawke's Bay's Briana Stephenson, who represented Auckland at the nationals, did well to capture bronze with a personal best time of 23.85s. The 21-year-old Napier Girls' High School old girl was competing in the 200m for the one and only time this season and finished the nationals with a gold, silver and bronze from as many events.

Hulls, who has represented the Hastings Athletics Club since she was six, finished the meet with gold, silver and bronze medals. She ran the second leg of the 4 x 400m relay for the Hawke's Bay-Gisborne team which won bronze.

Other members of the team were Ruby Brett, Brianna Lee and Briana Irving.

They recorded a time of 4m01.51s. Auckland's winning time was 3m42.51s and Canterbury were second. 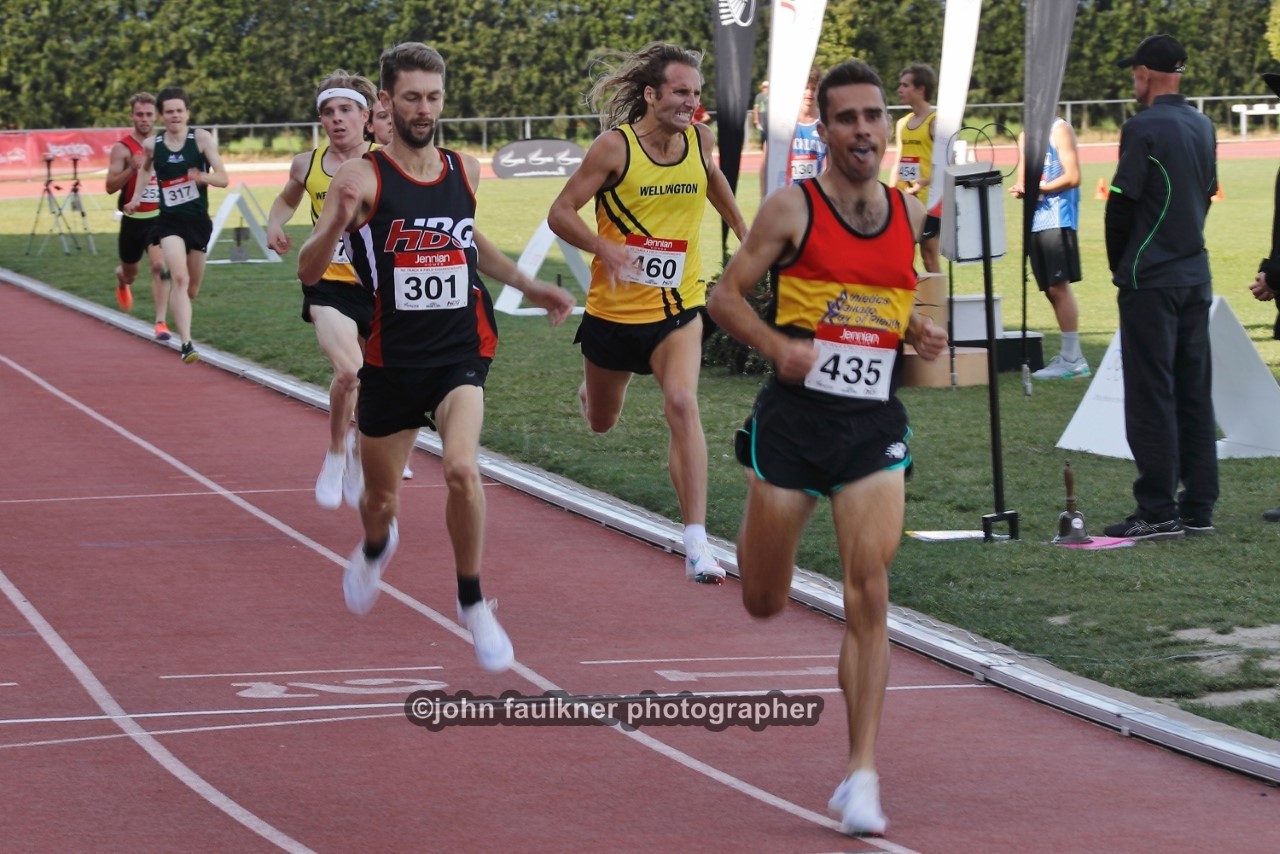 Hawke's Bay's Eric Speakman (pictured above in singlet 301) finished the nationals with two silver medals. Following his silver in the 5000m yesterday the 30-year-old Taradale High School old boy repeated the feat in the 1500m today.

He recorded a time of 4m01.70s while Waikato-Bay of Plenty winner Julian Oakley (pictured above in singlet 435) stopped the clock at 4:01.35.

"I didn't want the start to be so slow. The windy conditions weren't ideal. But I thought I would still go for those Olympic Games qualifying points," Speakman explained.

"The plan was to tuck in and go with the sprint. It didn't quite time it right. While I left it a bit late I was happy with the way I came home."

"It's been a summer of silvers for me ... obviously I'm going to have to try something different next summer ... I've got four silvers to three different people," Speakman said.

Earlier this season he finished second in the national 3000m and mile championships. Speakman finished his nationals campaign by running the second leg of the 4 x 400m relay for the Hawke's Bay-Gisborne team which finished fourth.

"That's always a bit of fun running in the relays," Speakman added.